The model of the Italian brand will reach dealers in the second quarter of 2023. The ICE versions will be the first to enter the market, followed by the “green” Folgore version.

The release of the first generation Maserati GranTurismo was stopped in 2019, since then dealers have continued to trade in leftovers (71 copies were sold in Europe in 2020), and fans of the model have to wait for the second generation coupe. Back in March of this year, the Italian manufacturer showed a prototype of the all-electric version of GranTurismo Folgore in camouflage film, at the beginning of last month the model was shown without camouflage. Later in September, the company showed the appearance of the gasoline version of the “two-door”. Now it’s time for the official debut and detailed information about the new technology.

The Maserati GranTurismo is 4959 mm long (4966 mm for the Trofeo version), 1957 mm wide (excluding side mirrors), and 1353 mm high. The distance between the axles is 2929 mm (regardless of the version). For comparison, the dimensions of the predecessor: 4881 x 1847 x 1353 mm; wheelbase – 2942 mm. The Italian manufacturer has not yet shown the interior of the new coupe. It is known that the “two-door” will receive a virtual “tidy” with a diagonal of 12.2 inches, a 12.3-inch multimedia system touchscreen and an 8.8-inch air conditioning control screen. Optionally, they will offer a projection screen and another display in the interior rear-view mirror.

The design of the novelty looks rather evolutionary: it has a long hood with ventilation holes, but in general the body looks more sculptural. “Dvuhdverka” left a recognizable branded oval-shaped radiator grille with vertical double slats and a large logo in the form of a trident. The stub of the “green” version of Folgore is designed in a similar way.

The head optics received a more vertically elongated shape, while the taillights are located horizontally and go to the trunk lid of the coupe. A large air intake is integrated into the lower part of the front bumper, while the electric modification has only a pair of small air intakes on the sides.

In the petrol versions of the new GranTurismo, four round exhaust pipes (two on each side) attract attention in the rear bumper, while in the Folgore variant, only reflectors and a relatively laconic diffuser are located in the lower part of the stern. The car received 20-inch alloy wheels at the front and 21-inch at the rear. Their design differs depending on the version of the model.

The standard GranTurismo coupe received air suspension (the predecessor had springs): double wishbones in front and a multi-link rear. In the “base” there are adaptive shock absorbers. The body structure uses more elements from aluminum and magnesium alloys, and ultra-high-strength steel is also used. The curb weight of the new coupe is 1795 kg (1880 kg for the previous generation model).

During the generation change, GranTurismo lost the V8. The coupe received a 3.0-liter V6 biturbo engine of the Nettuno series, which is also equipped with the MC20 and Grecale. The engine is paired with an eight-speed ZF 8HP75 automatic transmission. The coupe has an all-wheel drive transmission (the predecessor had rear-wheel drive).

The output of the motor in the performance of the Maserati GranTurismo Modena is 490 hp, and the maximum torque is 600 Nm. This version has a rear self-locking differential. The maximum speed of such a “two-door” is 302 km / h, and it takes 3.9 seconds to accelerate from zero to “hundreds”. In the Trofeo variant, the engine is boosted to 550 hp. (650 Nm), he received an electronically controlled rear differential. Its maximum speed is limited to 320 km / h, and such a coupe picks up the first “hundred” in 3.5 seconds.

The “green” version – Maserati GranTurismo Folgore – has a three-engine power plant: one is located on the front axle, two more on the rear. The total output of this system is 761 hp, the maximum torque is 1350 Nm. Traction battery units with a capacity of 92.5 kWh (usable capacity – 83 kWh) are located inside the central tunnel, under the front seats and behind the back of the rear sofa. Because of this, the trunk volume of the “train” is less: 270 liters instead of 310 liters for gasoline options. The curb weight of such a coupe is 2260 kg, there is no information on the power reserve yet. This “two-door” can also accelerate to 320 km / h, and it needs only 2.7 seconds to accelerate to “hundreds”.

Maserati will manufacture all versions of the new GranTurismo at the Fiat Mirafiori plant in Turin, Italy, and the Levante crossover is coming off the same assembly line. The model of the Italian brand will reach dealers in the second quarter of 2023. The ICE versions will be the first to enter the market, followed by the “green” Folgore version. The company will announce prices later. 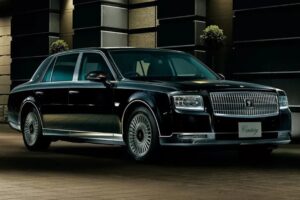 Autoworld news: Toyota will release the most expensive Century-class SUV